The Forever Summer Surf Fest II is now a memory… it ended with an absolute BANG! on Sunday 6/27/2010.  There were so many activities over the 10 days, so much to see and learn about… and all have agreed, the festival was truly a success!  Hat’s off to Revlon Benoir and Mick Lunasea for pulling together a community to celebrate Surfing of Second Life in a way that encouraged unity!

The Festival officially opened on June 19th with carnival rides, exhibits and games already set up.  The Photos being submitted for the contest started popping up in the contest huts and people were free to mill about the entire full sim to see what the Second Life Surf Community has to offer.  Exhibitors ranged from surfboard texture designers to wave and board scriptor/creators to surf sims to other creators that support the community.  There were an amazing number of exhibits all creatively put together.

On June 20th, the first ever (that I know of) paddle board competition was held!  This contest required the entrant to lay on their boards and just paddle around the sim perimeter.  It was an event that anyone could participate in!  The competition was fierce and held in a multi heat style.  At the end, the results were…1st: Colleen Brennan; 2nd: Kim Henig; 3rd: Kalif Christenson

After the Paddle Board comp, Jac and I hosted “Sol for the Soul” with DJ Azu Catteneo spinning some awesome tunes.  This event brought in quite a number of non-surfers and seemingly was enjoyed by all.  The music was great, the conversation lively and all in all fun evening.

Throughout the week, there were other various activities generally anchored by a DJ or Band.  Lots of just gathering and exploring the exhibits and just hanging out with friends – old and new.  On Friday night, 6/25, the festival returned us to HighSchool with a Homecoming party of sorts.  DJ RJ Schwade provided the sounds, Tauri Tigerpaw provided the “speech” and the Festival Couple was crowned.  That couple just happened to be Jac and me, so we were awarded the crowns and then danced the night away with friends, laughter and fun.. 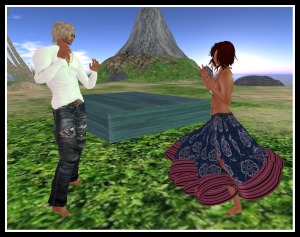 The weekend brought lots more activity with an awesome Fashion Show featuring surf- and beachwear on Saturday afternoon.  The Opium Modeling Agency did a great job showing off the creations of several of the surf community’s finest.  The models fought the lag and displayed some very hot and sporty looks.  The show was well attended and the crowd very receptive to the hot chicks in bikinis and the equally sizzling guys in boardies and such.

The Festival’s Final Day was so action packed, that it was hard to leave the sim!!  Starting off with an incredible exhibition from HP Designs, we saw Leogarto Burt and his team on the HP Joaquina waves with HP5 surfboards and his new kite surfer.  The surfers zipped around and over the waves totally ripping it up.  It was action packed, fast and furious, and a great way to see just how much fun surfing in Second Life can be!  Next up was the mini competition sponsored by Vibrations Surf Alliance.  Competitors included surfers who had either never competed or had not in a long time to those that compete regularly.  It required the competitors to show their stuff on three different type of waves – the HP Joaquina, the SSI fluffies and the SSI Pipeline.  At the end of the comp, the competitors were exhausted but thrilled with the results:  1st – (tie)  MaryAnn Maa and OldSurferDude Danitz; 2nd – Kim Henig; 3rd – Maxwell Silvansky; 4th – Bullet Admiral. Truly a fun event, with Max never competing and MaryAnn not competing in a very long time, it was a true confidence builder as well! 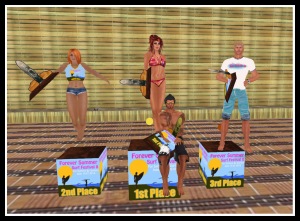 After the competition, Sally LaSalle, a long time surf community member; former SLSA director and owner of the Chi sim, talked to teh crowd about why the surf community of Second Life is important and how all can be involved.  Then we were treated to Sebastian Saramago, Surf Systems Inc Creator,  speaking about “Future of Surfing Technology in SL” from his point of view.  Both Sally and Sebastian are well thought of throughout the community and the crowd was very complimentary of their presentations.  Sally’s Speech and Sebastian’s Speech can be found on the Surfwatch blog.

After the speeches, Syx Toshi announced the winners of the Photo Contest – 12 photos received accomodation and will be part of a calendar to be published later.  Those submitting winning photos were as follows:
1st – Livia Nayar; 2nd – CoolKat Delicsio; 3rd – Monq Pinklady; 4th – Aeryn Kidd; 5th – Rockytheskaterboy Dreadlow; 6th – Rayzza Rubble; 7th – Sunshine Zhangsun; 8th – Renn Luik; 9th – Matti Portal; 10th – Figger Arun; 11th – Maryann Maa; 12th – Rom Heungsung.
Then for the finale…  the SLNFL Bronco Cheerleaders cheered in the Final Event – The Beach Boys of SL concert!  For the next 1.5 hours or so, the crowd of 65+ danced, shouted, and swooned to the sounds and songs of the Beach Boys.  Definitely a great way to end a Surf event… the quintessential band for the world of surfing for the last 45 years!

Truly all in all, the biggest accolades go to Revlon Benoir and Mick Lunasea who pulled this event together.  This festival allowed all to come together and get to see and hear about the sport of Surfing in SL as well as enjoy the time with friends – new and old.  Revy and Mick totally shredded the waves by encouraging the SL Surf Community to feel the sense of unity… Can’t wait for Surf Fest III!!!
Let’s go surfin’ now.
Ev’rybody’s learnin’ how.
Come on a safari with me.
(Come on a safari with…)

Early in the morning we’ll be starting out.
Some honeys will be comin’ along.
We’re loading up our woodie with our boards inside,
And headin’ out singing our song. 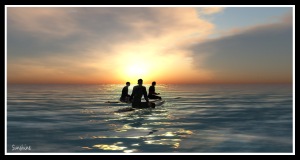 ~til next time…keep on surfing the waves!
~~Sunshine~~