In early November, Jac and I were talking about the state of Sol Mañanero and where we wanted to go with it.  We had seen Sol change over the 17+ months with the most recent change that I blogged about earlier this year.  We still felt that we had the most beautiful home location and surf sim and while we could keep it as is, we both seemed to need something different.  My “compound” built by Patch Thibaud had been my primary home in SL for over 2 years and quite frankly, it felt like it had become more of a monument than a home.  I know that change was the “air” for me.

We tossed around a few ideas and realized that we both still loved the elevation and did not want a “flat” environment.  We decided mountainous and seasonal would be a good way to start.  Well since the “season” upon us was Winter, we jumped right into the cold, crisp climate!

In less than 10 days, the full sim had been transformed into a beautiful mountain home full of snow and ice!  Hardwoods and evergreen trees growing everywhere along with grassy meadows and water.  Can’t live without the waterfalls and rocks either, so we added those in as well!  The main home from GOL Project Design (Dakota Neumann) is elevated and I built wood decking to help integrate it into the terrain.  In the next few weeks, we added bits and pieces here and there. 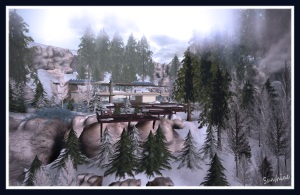 But we were really struggling on what to do with the homestead (surf) sim.  We thought about mountain cabin rentals for the season with snowmobile tracks around a lake, about just the lake with trails, and then while I was away and not online too much, Jac came up with the brilliant plan of true arctic surfing.  It would be new and different, but fun and incorporate an SL activity that we both still enjoyed.  He had started it with the amazing terraforming and thoughtful design and then I added ice piles and floating icebergs…  Jac put in a Botha designed house to serve as a “warming” house for all that freeze themselves in the water and I again built decking to make it accessible.

Now less than 6 weeks later, I think that the sims are nearly complete.  Yes, we will tweak here and there, add something or remove, but the concept and primary bits are done.  On the “surf” sim, we have orcas in the water, seal colonies on the ice and wolves chasing caribou on the land.  On the home sim, beautifully peaceful mule deer graze in the meadow, elk are near the waterfalls, arctic fox up by the house and mountain sheep in the hills.  Sounds have been placed, so we hear the hoot of the snowy owls, the waterfalls, the seals yapping and the orcas chirping as the wind blows across the land, water and ice.  In addition to surfing, we have skating on the main lake and sleds (in a rezzer) to zip down the hill upon.  As the night falls, and yes, we only have short days, the skies light up with the Aurora Borealis which brightly beams all around. 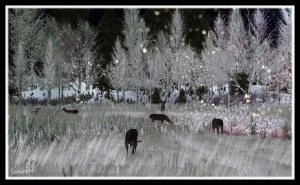 Come visit… surf a bit (wear your warmest wet- or dry- suit), then head into the warming house out on the surf sim.  Walk into the main sim and find the skating animations on the iced over lake  (single and couple versions) and then look for the sled rezzer up on the hill, jump on one and zip down the hill!  Just be sure to turn your environment to night (9pm or midnight) to enjoy the lights dancing across the sky.

We call this our… Winter SOLstice… and we hope that you will enjoy it as much as we have while putting  it together!

p.s. Watch for the announcement of a party on 17th of December… yesssssss just around the corner!